L ~ Life on the Farm

Whenever we had gone to my Grandma's surprise birthday party/reunion, I got to play one of my favorite board games again, Life on the Farm.

Now we do have the same game at home but I had not played it in a very long time because either I had forgotten how fun it was to play, or perhaps it was just fun playing it with cousins I didn't even know existed.

Anyways, it was after the whole reunion that my Mum brought to light a very hilarious bit of information about my Grandpa concerning that good old fashioned game. It so seems that my Grandpa very dearly abhorred the expense cards that made you kill a cow, or have one run over or shot, etc. So much in fact that one day he took all of those cards out of the deck and stuck them in his pants pockets before playing the game. Then a few days later my Grandma had washed his pants, oblivious to the hidden nightmares inside, and those cards were destroyed never to plague anyone ever again.

Maybe that is why it much more fun playing Life on the Farm at my grandparent's place. 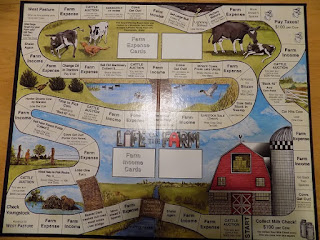 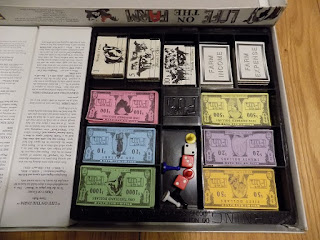 Posted by Little Bits of Lovely at 8:53 PM