In my family the only person who actually loves, and drinks coffee is my Dad, and every time it is time to buy more coffee he always chooses a different flavor. Currently he's trying all the different flavors of "Boston's Best" coffee. The latest flavor is titled "Jamaican Me Crazy" The only thing wrong with that coffee is that nothing about it has anything to do with Jamaica, I actually think the flavor was "Caramel and Vanilla" now isn't that interesting!  How did that coffee get named Jamaican Me Crazy? It's been driving me crazy trying to come up with different scenarios of how the choosing of the name could have happened. 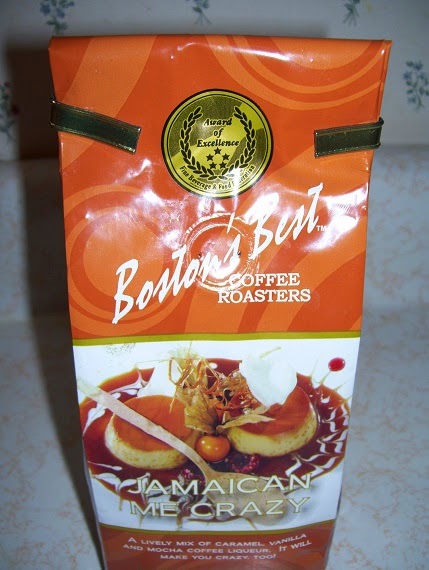 My favorite theory goes something like this....
It was going to be another busy day for Carla Greenwood. So far her day had not been going well. She had overslept and she had forgotten to add water to her coffee maker last night so she couldn't enjoy her regular morning cup of coffee before she headed to work.she was having a slight headache and feeling a little grumpier than usual. Not only was she asked to arrive at the office an hour early, but she was also supposed to attend a conference to decide what to name the newest blend of coffee. She hoped there would be plenty of samples to sip and taste while they brain stormed.
When she got to the office the elevator wasn't working so she had to slowly trudge up the stairs. At the landing she turned right and entered the CEO's office. Already her fellow co-workers were sitting around the long brown table that occupied most of the room's space. After sitting down immediate discussion broke out, a red headed lady that happened to be Carla's best friend Tanya said "We should name it Caramel Dreams, across the table a brown haired man disagreed heartily and said that obviously we should just name it Caramel and Vanilla Mocha, soon a childish fight broke out and poor Carla sighed and rubbed her aching forehead, the argument had been going on for half an hour when finally Carla yelled "You're making me crazy"  All talking ceased and heads turned and everyone started clapping, " Brilliant Carla, just brilliant" said the brown haired man, "Yes, positively witty" agreed her best friend. "Jamaican me Crazy" is the perfect name. The CEO loved the idea and told Carla  to leave early so she could come up with a presentation the next day. Carla rose weakly from her seat and walked down the stairs to the car parked right outside the building. She decided she would never tell anyone that they had misunderstood what she had been saying.

The next morning Carla made quite an impression at the presentation and over the next week the company had produced hundreds of packs of their newest coffee.

And that my dear friends is my favorite theory of how this coffee got its name.
Posted by Little Bits of Lovely at 9:36 AM